There are many sayings about the changeable month of April and it didn’t disappoint this year. It certainly was a fickle month. We had rain, hail, snow, and horrible easterly winds. But we also had some great hatches. March Browns and Large dark Olives continued to hatch in the early part of the Month. The […] Another trout season in Eden kicked off on March 15th. Strong winds and heavy overnight rain meant that opening day was a bit of a washout – then Storm Hannah hit us on the 16th! A nice fish to start the season March Browns were hatching The river was dropping and fishable by the 19th […] September and the end of another season in Eden

The seasons seem to fly over nowadays and the final month came around faster than I would have liked. But – despite changeable conditions – we finished 2018 on a high. The month saw a mix of newcomers and re-visits to Eden, our rivers provided most with some action, and I managed a Personal Best! […] The long overdue rains arrived in August. River levels fluctuated during the second half of the month and we had some great fishing! The water temperature was slow to drop, but the fresh water and tinge of colour certainly woke the fish up. They still had their moments when they refused to ‘play ball’ but, […] July, like June before it, turned out to be one of the driest and warmest on record – which was definitely not what we fisherman would have wished for! The rivers were very low and water temperatures were high, so we had to choose our areas carefully. Areas where the water was cooler and more […] Flaming June has certainly lived up to it’s name, some areas have experienced the warmest and driest June on record! The month actually started off with a couple of wet days: the Eden and it’s main tributary, the Eamont, both rose slightly. The touch of fresh water perked things up during the first week of […] Fly fishing in sunny May Eden saw a wet start to April and our rivers were out for most of the first week. They were dropping back and fishable by the 7th. The water temperature was still pretty low; it was down at 6°C but that didn’t stop the Large Dark Olives from hatching in force. A few fish were […] The Beast from the East

The ‘Beast from the East’ has certainly taken it’s toll in the first two weeks of the new trout season. Apparently this weather system with it’s ominous nickname was driven in by winds from Siberia, bringing bitterly cold weather and snow to much of the country. Most of the snow at lower levels had disappeared […] 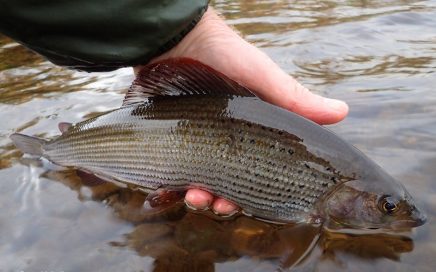 November started dry and relatively mild. Most outings during the first ten days saw hatches of midge, trickles of Large Dark Olive and short periods of rising fish. It was nice to have the opportunity to do some spider fishing, instead of what tends to be the customary winter task of plumbing the depths with […]