June was a mixed month: we had some beautiful weather with temperatures soaring into the high 20’s. But we also had some very wet weather – including a few thunder storms – at times, which brought the river’s up. We were lucky though and no fishing days were lost to the weather. 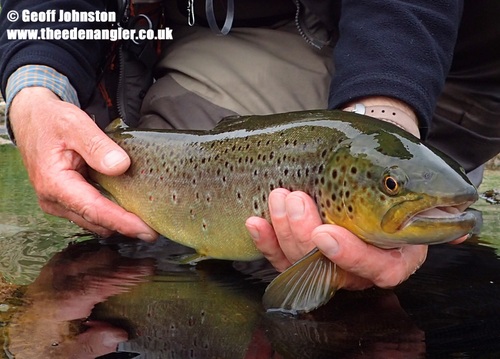 A midge feeder is returned

The month started dry and we had some good top of the water sport. Daytime hatches weren’t great but fish were willing to look to the surface for food and we had some good sessions – either speculating with dries or when fish were feeding on midge and small emergers.
I witnessed my first Blue Winged Olive hatch of the year during a late evening session on the 3rd of the month. Fish fed on the BWO’s in the failing light before turning their attention to the caddis. A good number of fish responded to imitations of both species. 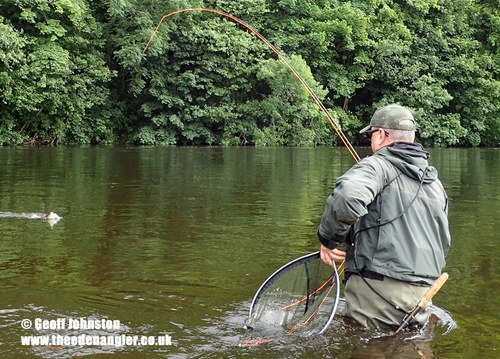 Nick reaches for the net

The weather was a touch more unsettled towards the middle of the month and we had a coloured river for Nick’s first taste of Eden. I often think of colour in our rivers in terms of ‘good colour’ and ‘bad colour’. It was ‘good colour’ for Nick and ringing the changes throughout the session brought some action to his offerings. 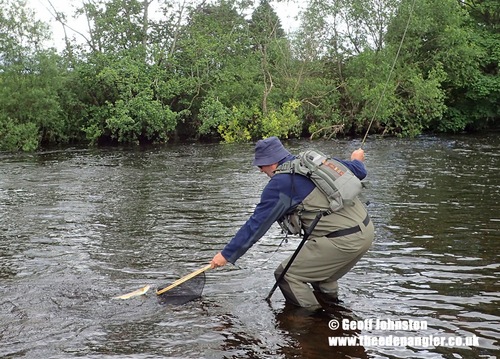 Jon draws a fish to the net

The river was still carrying a touch of colour when Jon joined me. It was in good condition though and perfect for our purpose: to look at various nymphing and dry fly techniques. I often complain that the fish very rarely follow the script and can sometimes be a touch uncooperative for my clients. So it was good to see a few fish oblige for Jon’s session. We managed to locate rising fish for our dry fly session, and a few responded on cue when we looked at the nymph…. 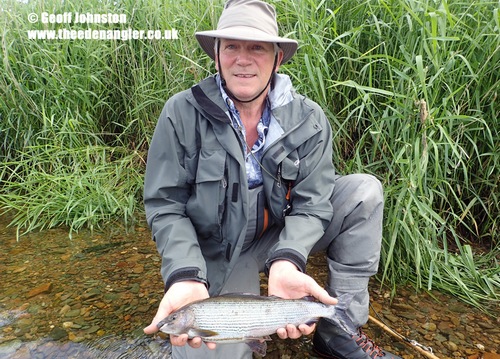 A first Eden Grayling for John

The changeable conditions with a slight lift in levels and subsequent drop in water temperature suited our Grayling. I used to find that we rarely came across them at this time of the year, but the unsettled summers of the last few years seem to have suited them, as they have been turning up with more regularity during the summer months. This was the case when John joined me for his first taste of Eden. We found a number of rising fish and he managed some good sport to the dry fly. 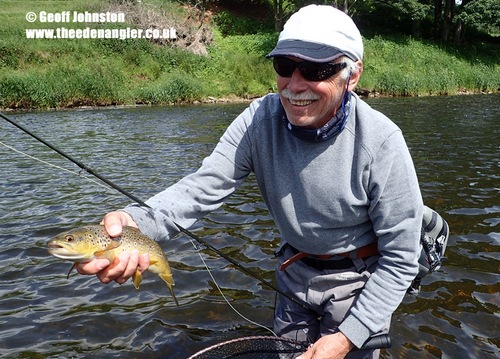 Manfred on his first visit to Eden

I get many clients who are trying Eden for the first time. Manfred and Daniela were over from Switzerland for their first trip to the UK and we had a few days together to sample the Eden system.
I find it very interesting to discuss other waters, flies, tactics etc. with many of my overseas clients, so it was great to chat with Manfred and have a peek into his fly boxes. He had some very nice flies, predominantly tied with cdc (cul de cunard), which – based on what I’ve read of Swiss anglers – is what I expected.
They were very interested in the tactics that we employ on our waters, so I introduced them to our ‘North Country spiders’, ‘ The duo’, traditional ‘Upstream nymph’ and fishing very small dries. Our rivers were kind to them and everything that we looked at produced fish for them on each of their days. On their final afternoon with me we found a few midge feeding fish on the Eden flats. Rising fish were targeted with dries and  responded positively to size 18 and 20 midge patterns. 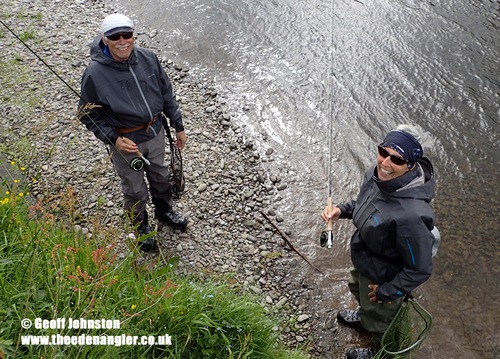 Manfred and Daniela had their first taste of Eden 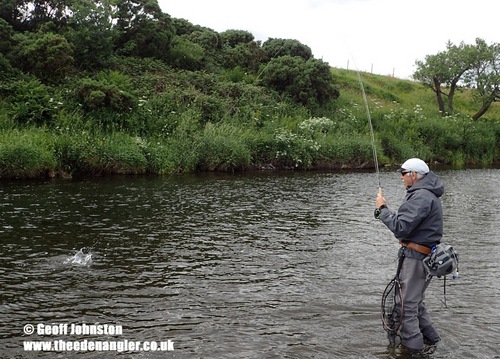 As we move into July and August we are hitting what was once renowned as the toughest months of the season for daytime sport. But I must stress ‘once’ because that was when we had more pronounced seasons and we didn’t have the tactics to cope with what was our warmest and driest months.
Nowadays our summers seem to be much more unsettled. Over the last few years we’ve had wetter summers and fluctuating water levels. Water temperatures have been lower at times and the fish have been much more tolerant of the conditions and willing to feed. Plus, we also have a greater variety of techniques at our disposal. So I’m looking forward to hitting the water in July and the challenge of whatever the river throws at me….