The ‘Beast from the East’ has certainly taken it’s toll in the first two weeks of the new trout season. Apparently this weather system with it’s ominous nickname was driven in by winds from Siberia, bringing bitterly cold weather and snow to much of the country.

Most of the snow at lower levels had disappeared for the new season, but it remained at higher levels and the subsequent bouts of snow-melt have kept our water temperatures down. Water temperatures recorded so far on my local rivers and lakes have ranged between 4°C and 6.5°C.

But it’s not all bad news; we’ve had some very good hatches of Large Dark Olives with the occasional showing from the March Browns and some very good fish have been caught – they just haven’t been feeding very hard in the low water temperatures. 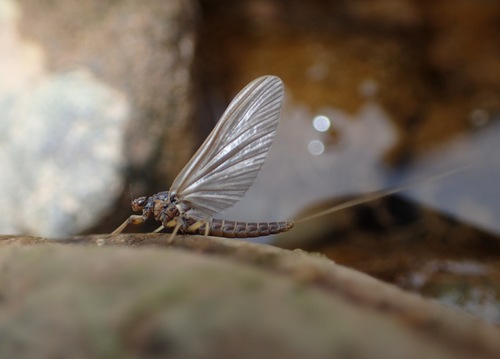 We’ve had good hatches of Large Dark Olives on occasions

The first time I read anything about the effect of water temperatures on the fish and their diet was in a book borrowed from a friend many years ago (probably about 35 years ago). That book was ‘A Trout and Salmon fisherman for Seventy-five years’ (1948) by Edward Ringwood Hewitt.

From what I remember; Hewitt was talking about fishing Yellowstone Park and the effect of extreme high and low temperatures on the fish. Temperature levels that we rarely – if ever – experience over here, and how the fishes digestive system would shut down at these temperatures and they would cease to feed.

Even after reading Hewitt’s book, I still don’t really remember thinking much about water temperatures and their effect on the fish and fishing. In those days – when we had proper winters – the fishing was always tough in the opening weeks of the season, the fish were usually thin and in poor condition. I guess that I just accepted that that was the way it was – we just went fishing, and you had good days and you had bad days. That changed when I acquired little paperback called ‘The Trout’ by Frost and Brown. 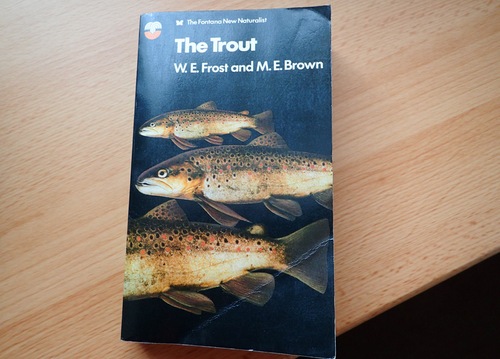 There is a section in the book that talks about the Maintenance requirements of the fish. Their explanation of these requirements fits with what we are experiencing at the moment. There’s too much information to cover here, but basically: the lower the temperature, the less energy the fish extends, therefore the less food it requires to maintain it’s existence; the higher the temperature – within reason – the more active it is, so it uses more energy and requires more food. Based on their the research, the greatest increase in maintenance requirement – and the one that will be of greatest interest to us fisherman – is between 8°C and 15°C.

So with our rivers and lakes ranging in temperature from 4°C to 6.5°C during the first two weeks of the season: I guess it’s understandable that the fish may have been be a bit lethargic, as their maintenance requirement is going to be relatively low. And it may explain why most of the fish that have been encountered by the few stalwarts that have braved the elements have been good fish. As Frost and Brown say ‘the larger the animal, the larger will be its total maintenance requirement’. 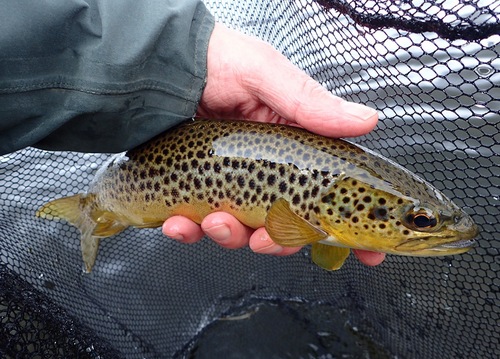 The early days of the season are when I like to get out to recce different areas, to see if there’s any changes after the winter. After a couple of river outings I decided to brave the elements and risk a day in the lakes. Conditions were perfect for lake fishing, but with the water temperature down at 4°C there was a good chance that it was going to be a bit of a dour affair – and so it proved. There was a time when I would never have ventured onto the lake in March and this year’s cold start reminded me of those days. But it wasn’t fruitless and – despite many unproductive drifts – my efforts were rewarded…. 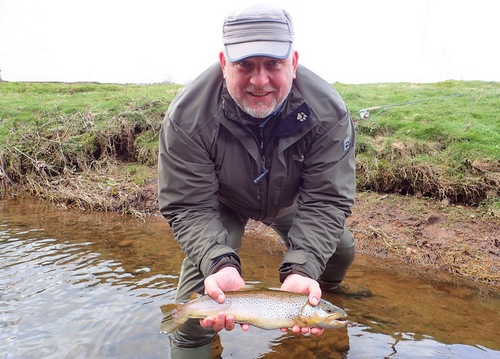 Conditions improved slightly for 1°C Thorsten’s visit. It showed that it doesn’t take much; on two of his days we had a lift in water temperatures (to 6.5°C) and fish responded to the surface fly. They didn’t feed hard, but it was great to see fish at the surface and a few responded to Thorsten’s offerings. On day one a hatch of Large Dark Olives brought them up and although they couldn’t be tempted with the dries, they did respond to a well presented Spider. On day two we had a mixed hatch of Large Dark Olives and March Browns, and fish were tempted with dry/emerger imitations of each species. 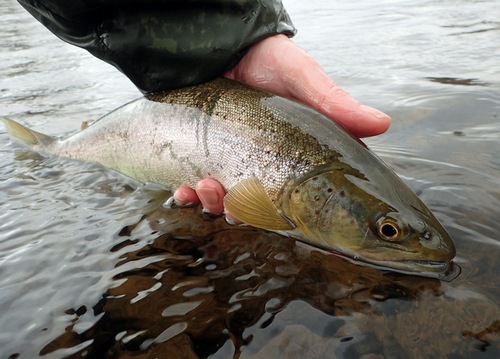 On the penultimate day of the month the water temperature dropped by 1°C and fishing slowed again. I only saw two rising fish – despite an excellent hatch of Large Dark Olive – and only one rose regularly enough to tempt with an Olive emerger.

April is here now though, so the weather should start to improve, water temperatures should increase and we have some excellent hatches to look forward to. With the best of the March Browns still to come and Grannom, Iron Blue Dun and Olive Uprights to look forward to, April can be a great month for dry fly sport. So there is a lot to be optimistic about…..