I must apologise for the lateness of this ‘May’ update. It was a busy month and if I wasn’t guiding or teaching, I was fishing myself and I’m afraid that I just couldn’t force myself to sit at the computer when there was fishing to be done! I always find it difficult to keep my blogs up to date during the trout season.

May was a good month in Eden, it started off wet and the river was up during the first few days, but it was falling for Chris’s session with me. A hatch of Large Dark Olives brought a few fish on the feed and Chris got a bit of action to a team of spiders. 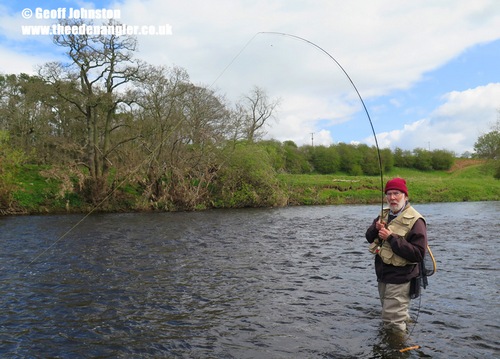 Chris is into a fish on the spiders

Hatches were good during the first part of the month: the Grannom and Large Dark Olives were still hatching in good numbers and we were seeing sporadic hatches of Olive Uprights, Iron Blue Duns and Large Brook Duns. My first outing was on the 6th and the Grannom were coming off in force – unfortunately the fish showed little interest in the surface fly, but a pair of nymphs produced a bit of action, with the best fish on the day weighing in at 2lbs 4ozs. 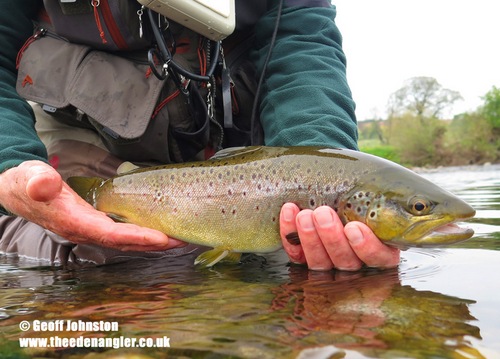 2lbs 4ozs  to the upstream nymph

It’s not very often that I venture off my own patch these days, but a rare foray on one of our border rivers paid dividends during the second week of May. As this trip was as much of a recce as a fishing day, I decided to wander with the dry fly – have a good look around – and hopefully come across some of the leviathans that my chosen venue has become renowned for. Grannom, Large Dark Olives and Olive Uprights were about throughout the day, but brilliant sunshine kept most fish down and rising fish were at a premium.
After a lot of wandering, I did eventually come across a decent looking riser. Stealth and angle of approach were going to be critical if I was to get a chance at my best – and probably final – fish of the day. So I crawled into position and watched for a while as the fish continued to rise. Olive Uprights and Grannom were floating into it’s zone, but they were being ignored in favour of something that I couldn’t see. There were a few tiny morsels floating past my position, so on went a size 20 black F fly. I often say to clients that you if you are casting to a fish it’s better to make your first cast short – it’s better to be short and add to the next cast, than be long and line a fish and put it down. So, my first cast was short, then I waited for him to come up again and covered him second cast. He rose confidently and took my fly, I lifted into him and he turned and tore off downstream. 3lbs 6ozs of Scottish border brown trout put up a spirited fight before it was netted, weighed, photographed and released…. 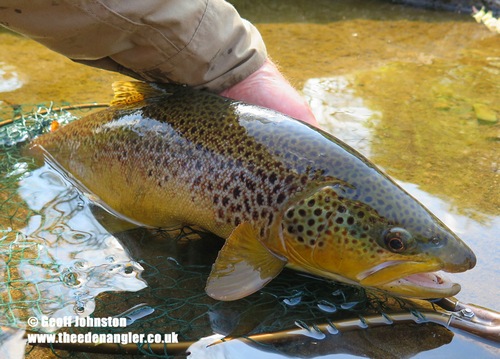 I was back on my beloved Eden the following day and small was the order of the day again. Fish were rising when I hit the river, but, although I could see Olive Uprights, Grannom and the occasional Iron Blue dun on the water, I saw none taken. The only other thing I could see on the water were Greenfly, so on went a suitable imitation. The first fish I cast to took it without hesitation and that continued throughout the day: every rising fish I covered came up for the small fly. I even tried larger flies at times – just to see if they’d look at imitations of Olive Uprights and Grannom – but they wouldn’t look at them, it had to be my tiny aphid imitation or nothing. 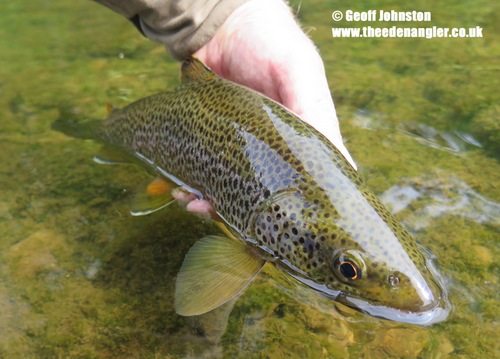 Chris joined me for a day in the middle of May, to look at techniques. I saw the best hatch of Iron Blue duns that I’d seen for years and not one fish rose! we looked at fishing spiders, the ‘duo’ and French leaders – all produced for Chris throughout the day. 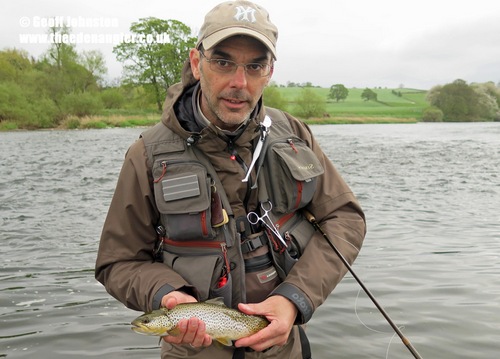 Chris had success on a variety of techniques

May turned out to be a very dry month and the river was beginning to show it’s bones for the visit of Steve and friends in the middle of the month. The river performed well – despite the conditions – and so did the whole group.  Varying techniques between nymphs, dries and spiders ensured that everyone caught fish during their three days in Eden… 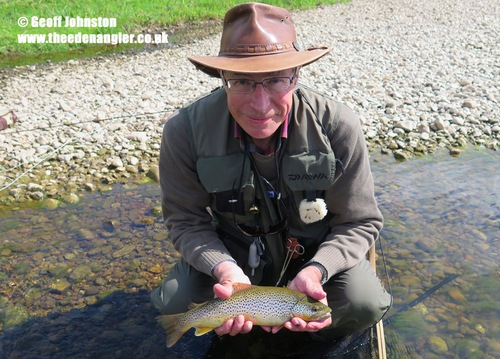 Barry with the group’s first fish on day one 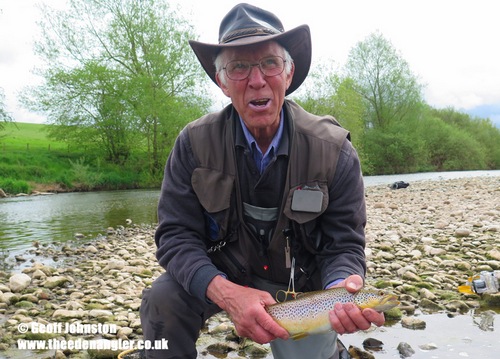 Jim with a nice fish 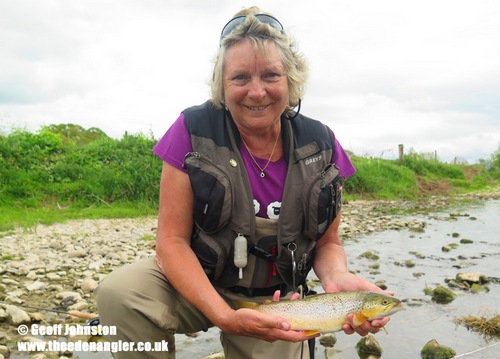 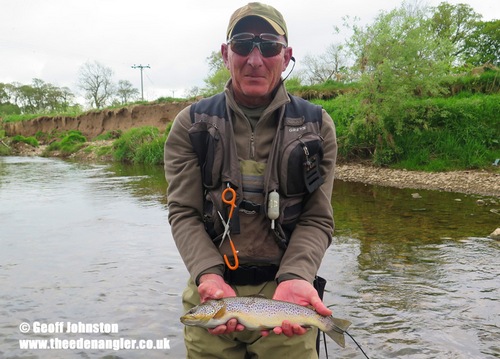 Peter with took a nice fish on the dry fly

Conditions were looking tough for Martin and Roland’s three days in Eden during the final week of the month: we had sunny weather and our rivers were down to their bones, but the river gods smiled on them. Good hatches of Olive Uprights and Medium Olives had fish feeding at the surface and two lucky anglers had three days of surface sport with decent numbers of fish coming to their dry offerings… 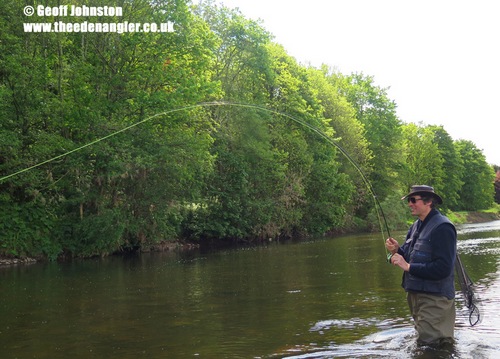 Martin is into a fish 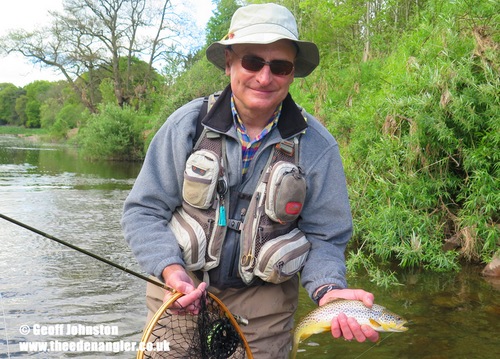 Roland with a fish on the dry fly

Our rivers continued to fish for Scott’s day in Eden. He came to work on casting and river techniques…it didn’t take him long to cast and present his flies to a good standard . I often preach that if you get your casting skills up to a good level and present your flies well, you should get your just rewards. It’s great for me as a guide/instructor when all this comes together; it did for Scott and a good number of fish came to his well presented offerings. This also gave us the opportunity to look at playing/landing fish – another important discipline…. 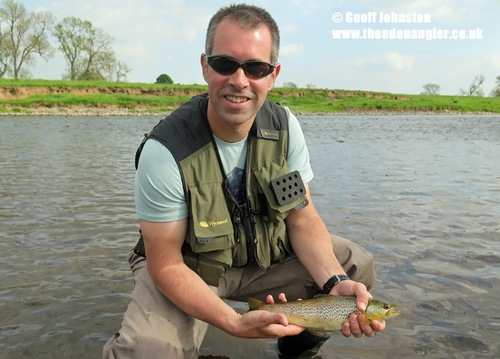 Scott with his best fish of the session

So, May was good in Eden. The month started wet before summer arrived early in Cumbria and we experienced a long dry spell with our rivers dropping throughout the month. Hatches were good and fish fed well on occasions, with most Eden Angler clients – too many to show here – experiencing good and productive days on our rivers. The conditions didn’t suit our lakes and Ullswater was slower than normal, but we did have the occasional productive session on the few days when conditions were right. 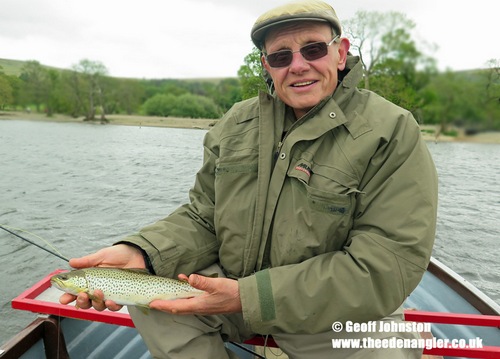 We had the occasional productive lake session when conditions were right