Happy New Year everyone. Welcome to 2016: a new year to look forward to, with fresh hope and our 2016 Brown Trout season only eight weeks away!
After the grim, flood ridden, end to 2015 we can only hope for better this year – it seems to have been a more positive start so far.

I managed my first outing six days into the new year. The rivers were dropping back nicely, still a touch big, but clearing and fishable. I arrived at my chosen spot with some trepidation, not knowing what I’d be presented with post floods: would the river have changed? would the fish have survived? I found fences flattened and uprooted; debris strewn over the fields. But I was relieved to see that the river hadn’t changed much. The banks were very much as they were pre-floods and the wading hadn’t changed much either. There was some areas that seemed slightly shallower and some slightly deeper, but, on the whole, this particular area was very much as was.
The river was still a touch big and appeared devoid of any life. The Grayling didn’t make a show, but I put that down to the conditions. Plenty of out-of-season trout showed an interest in my offerings though. They were not what I was after, but it was great to see that they’d survived the pre-Christmas deluges – and they were in good condition for early January. 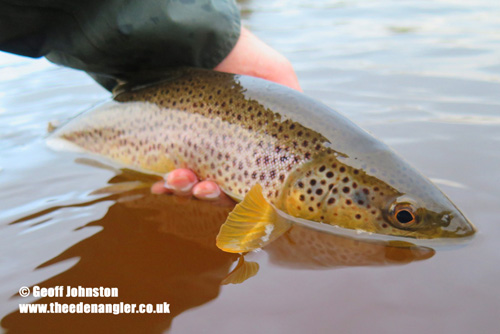 There will be changes, there has to be after what our area has experienced, but from what I’ve seen so far, they’ve been minimal.
My second outing of the year was to an area that’s been a ‘banker’ for a few Grayling over the last couple of winters. Now, that had changed! There had been an island that had split the river into a narrow stream on one side and a softish main flow on the other. The main flow had been soft enough and deep enough to hold Grayling, but fast enough to support a good head of trout too and the narrow stream was usually a good bet for a couple of trout in the summer. Three or four big winter floods sweeping through had removed all vegetation and left a pile of rubble where the island had been – there was now a puddle on one side of the rubble and a much faster run flowing down the other. With my Grayling-head on, my heart sank. It just doesn’t say ‘Grayling’ anymore and two recces since the change have produced nothing. It does scream ‘Trout’ though and I know that once the new season gets into full flow and I have my Trout-head on, I’ll be standing at the tail of the run and licking my lips in anticipation….

I did manage Grayling on my second outing of the year – so they had survived the floods. As usual at this time of year, I want my team bouncing bottom and once they were, the takes started to come, with the ladies taking a fancy for a touch of pink. 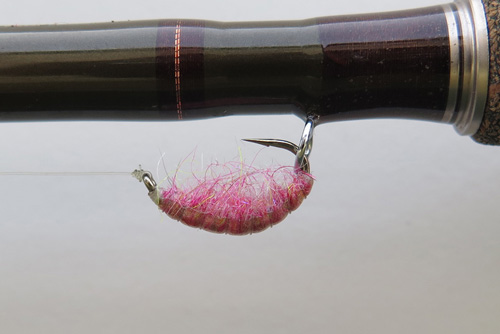 A severe drop in temperature and return to more seasonable conditions made life a touch uncomfortable for my next outing. I don’t know if I’m getting soft or I just needed time to acclimatize after the mild start to the winter, but either way, cold and snow curtailed the length of the session. It was slow going, but a few fish obliged before I made a hasty retreat to somewhere warmer…. 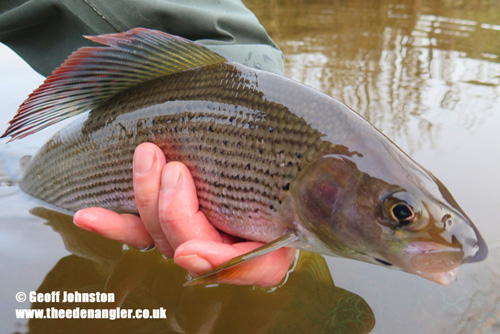 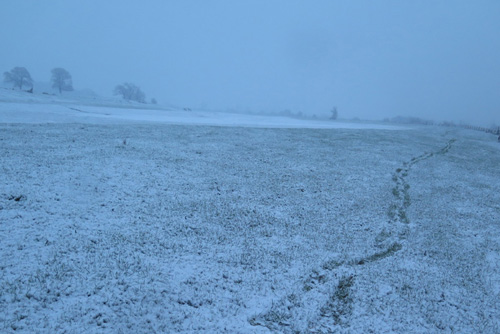 Our cold spell didn’t last long and and neither did the snow. We had about 10cm (4 inches) but a return to milder conditions meant that it was gone two days later.
This milder weather produces positives and negatives. On the positive side: it feels like the new trout season is looming large. Our ‘Spring Olive’ – the Large Dark Olive – is starting to trickle off the water on most days. There’s not many, but they’re good to see. I haven’t seen one taken at the surface yet, but the fish will no doubt be taking the active nymphs as they build up to and start emerging to the surface. Even though I’m not targeting out-of-season Trout, they’re not easy to avoid when fishing sub-surface and good numbers are starting to come to my offerings. They’re in great condition for the time of year too. Not that I’m surprised about that; they often are nowadays. When I was younger – and winters were colder – early season trout were usually pretty thin and in poor condition after a long, lean winter. But our milder winters and higher water temperatures are good to them and, over the last few years, I’ve often found them to be in good condition in the weeks leading up to the new season . Last year a good number of well-conditioned fish were turning up in February. This year they’re starting to show up in January catches. The photo below maybe doesn’t do the fish justice as far as getting an idea of weight is concerned. My scales – which were checked when I got home – suggested that it weighed in at 3lbs 4ozs and it was in great condition for the 21st January…. 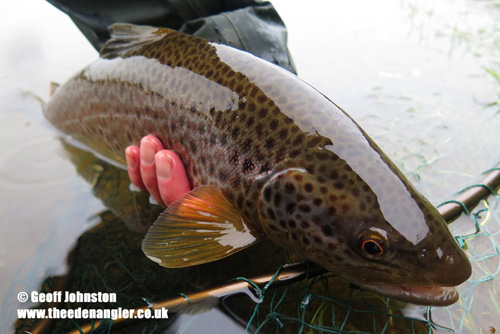 On the negative side: the mild weather is giving us rain, and lots of it. Today – as I write this – we’re getting hit by Storm Jonas. This, our seventh Storm since mid-November, has already battered the East coast of the U.S. with snow and now it’s popped over the Atlantic and turned to rain before battering us. It’s supposed to peter out over Cumbria by teatime, but it will bring our rivers up – they’re rising now. I feel a bit guilty as I sit here writing about fishing, when there’ll be some poor souls out there worrying about getting flooded for the second, third or fourth time this winter. Let’s hope it’s not too severe and it’s the last winter storm of the season.
It would be nice to see the weather settle down over the next seven and a bit weeks. Then we can, hopefully, have a nice easy build-up to the new Brown Trout season on the 15th March. Maybe squeeze in a few more Grayling sessions and dream of encounters with some well-conditioned Trout on opening day….