We’ve had a pretty typical April in Eden: it was a month of mixed weather, we’ve had the lot, ranging from sunshine to rain, to hail and snow and bitterly cold winds. Daytime hatches increased: Large Dark Olives hatched most days; March Browns continued to hatch until around the middle of the month; Iron Blue Duns showed on some of the most miserable days; I saw my first Olive Uprights of the year and the sun-loving Grannom hatched in their thousands…. 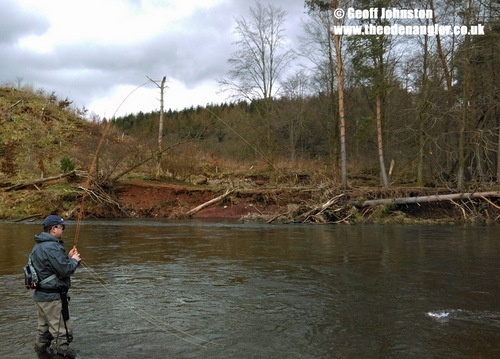 David is into his first Eden fish

David joined me at the start of the month for his first taste of Eden. The river had risen a touch after overnight rain, but it was falling and all looked good for his visit. We had a brief introduction to river techniques and flies, Large Dark Olives began to hatch around lunchtime and a good number of fish showed an interest in his offerings – and a few made it to the net. 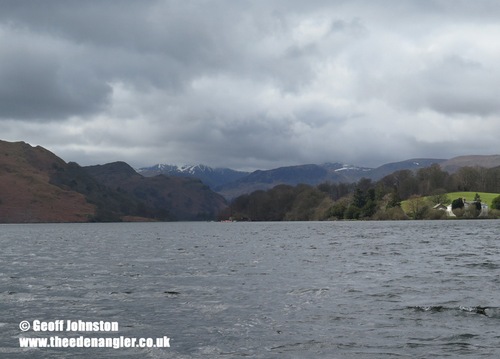 I managed my first visit of the year to Ullswater in early April. I’ve been fishing my favourite lake on and off for over forty years now and I never tire of it’s beauty – and the fishing. Despite what I would usually class as perfect conditions, I wasn’t holding out a lot of hope for much sport on the day. We’d had quite a lot of snow on the fell-tops and the resultant snow-melt will have dropped the water temperature, which can often slow things down on the lake. I needn’t have worried too much though: sport was a tad slower than normal for April and activity was a bit patchy at times, but by the end of the day, a good number of fish had shown an interest in my flies. 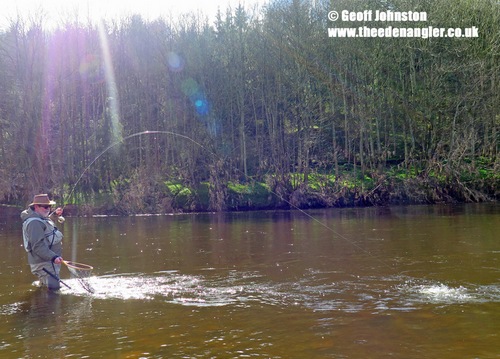 A positive start for David

The river was still carrying a touch of colour when David joined me for the day – but it was ‘good colour’. David has been visiting Eden for a few years now and he’s honed his skills over that time to become a very good and successful Eden-angler. The streamer ensured that he got off to a positive start on his first visit of the year, before – in anticipation of an early-afternoon hatch – we stopped for an early lunch. The Large Dark Olives didn’t disappoint, they hatched right on cue and the fish were soon “up and at ’em”. David changed to his favoured method and a well presented team of North Country spiders produced action throughout the afternoon…. 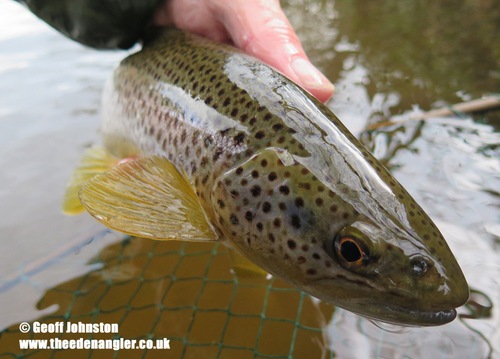 The cold and damp weather continued into the middle of the month and so did the hatches of Large Dark Olives and March Browns. The former were the most prevalent and with fish more tuned-in to looking to the surface for their food, some good sport was had on spiders and dries. 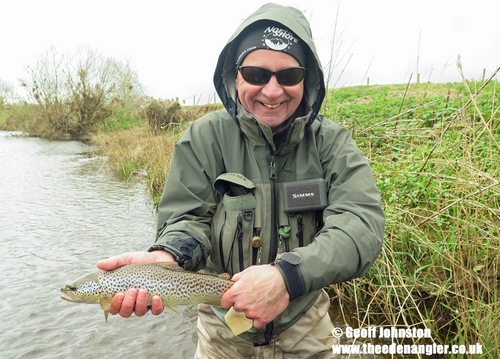 A fish on the dry fly for Graham

Stephen and Graham were in Eden  for a couple of days and the plan was a day on the river and another on the lake. It couldn’t have worked out better, with near perfect – albeit cold – conditions for each day. Neither had fished the spiders before and were keen to have a go, so after a brief introduction; both of these experienced fishermen put their teams to good use and –  despite the lack of a hatch – they caught, missed and lost a few fish. Large Dark Olives did eventually make a late appearance and Graham managed to top the day off  by catching the only rising fish that we came across.

Day two on the lake was another productive one for the boys. The morning session was very quiet, but – with the conditions that we’d had – it was to be expected at this time of year. I kept promising, and hoping for, better in the afternoon and the fish did come on. It was great to see the two good friends catch and have offers from a good number of fish and they both caught and returned the same amount of fish by the end of play. 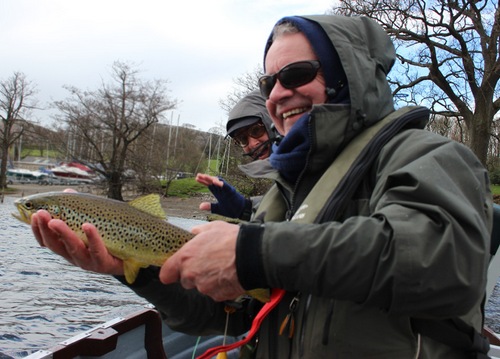 A good Ullswater trout for Graham 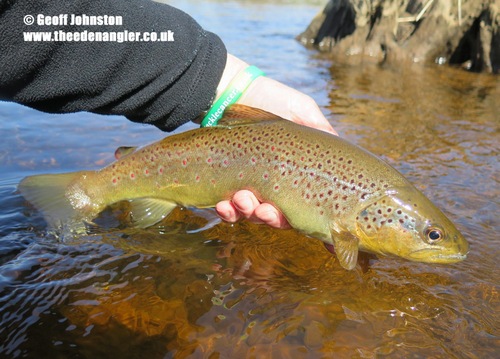 Fish fed hard during the first Grannom hatch of the year

The Grannom started on the 19th of the month – a day earlier than last year, when I saw my first on the 20th. The conditions were perfect for this sun-loving sedge and they hatched in their thousands. Fish were on them from the start and  a mix of nymphs and dries accounted for a good few…. 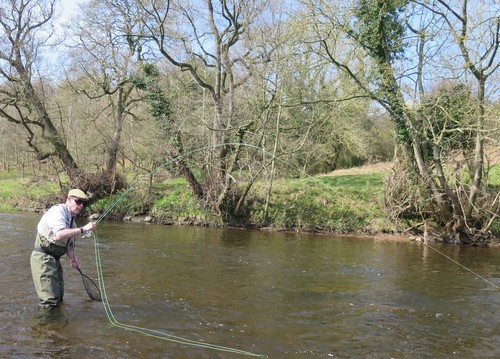 Ian is into a fish

Ian joined me to improve his upstream skills: we looked at nymphing, dry fly presentation and  ‘The Duo’. The Grannom hatched during the sunny intervals and cloudy intervals produced Large Darks and all techniques produced some action at different points throughout the day. 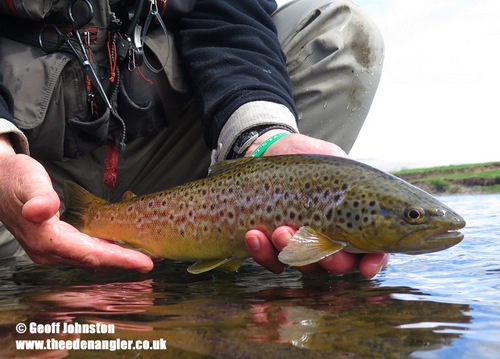 A nice Eden trout on the Grannom 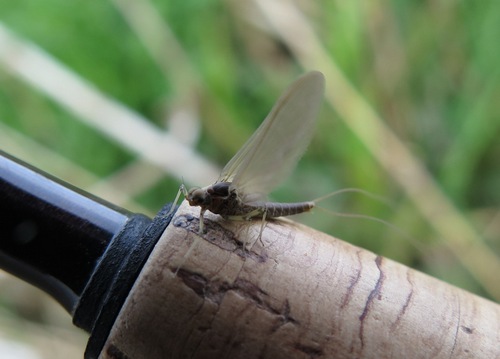 Peter and Martin were in Eden on the final day of April,  they were visiting to hone their fly fishing skills and to have their first taste of our great river. We spent a good part of the morning  working on casting technique and presentation before they were let loose to try their hand at tempting the intermittent risers that were taking the occasional Grannom and Large Dark Olive, during a very sparse hatch of both. They did well on their first visit and managed a number of trout and a good out-of-season Grayling…. 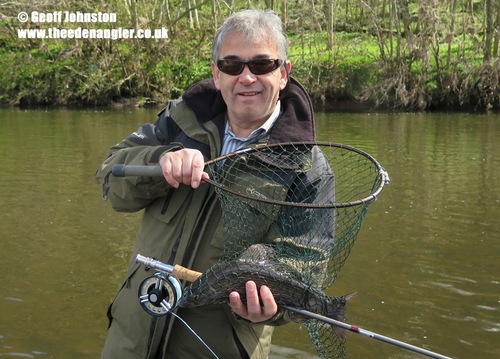 Peter with a nice out-of-season Grayling

So April was a good month in Eden, hatches were on the increase, fish were feeding and most visitors either caught or had the chance of some action – let’s hope that it continues into May.