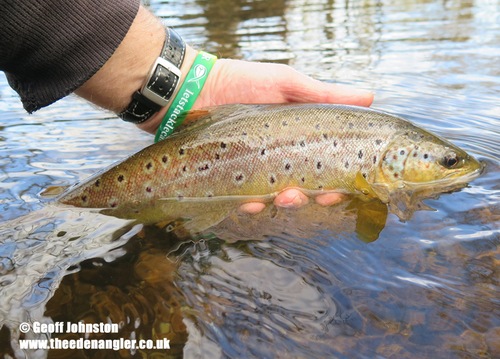 An opening day trout on the nymph

Our trout season in Eden kicked off on the 15th March and we had a relatively good start. Opening day dawned bright and sunny, and if I was honest, it was not what I’d have wished for, as our spring Olives don’t like sunshine and so it proved; I only saw six Large Dark Olives throughout the day. Despite the lack of fly life at the surface, a few fish were out in open water in search of a snack and responded well to sub-surface offerings.
That seemed to be the pattern for me during the first two weeks of the season: very sparse hatches, either no rising fish or just the odd oncer, but fish responding well to the nymph. They weren’t particularly deep, most of my success came when fishing a single nymph upstream on a tapered leader: a favoured method of mine on occasions, as it gives me the option of a quick change to the dry should I come across a rising fish. 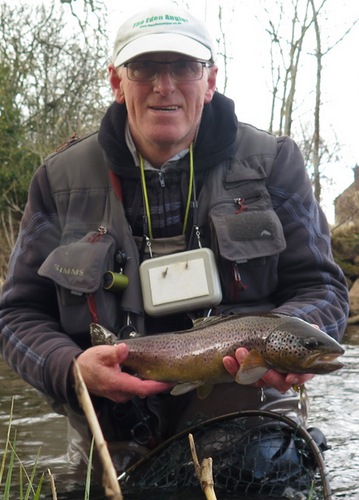 Mike joined me for a couple of days during the second week of the season. Hatches remained sparse, so we took the opportunity to work on a few nymphing techniques. Classic Upstream nymphing, French nymphing and the Duo or New Zealand dropper were all looked at, and executed well by Mike to ensure that he got a bit of action to his offerings. 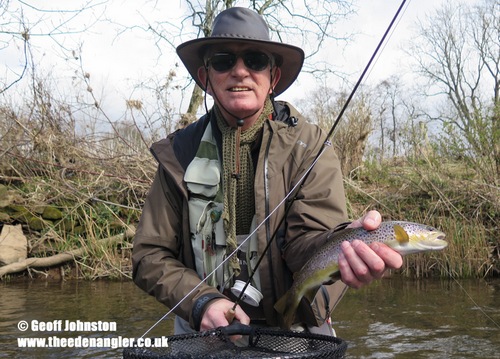 Mike with his first fish on his day in Eden 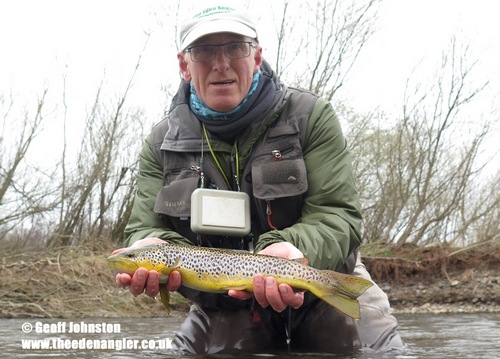 A nice fish to the upstream nymph

Reports were coming in from a good friend that he’d been experiencing good hatches of Large Dark Olives and March Browns elsewhere in Eden, so it seemed that maybe I hadn’t been lucky enough to be in the right place at the right time. Hatches of both these species can be very short-lived affairs and very localised. You can sometimes miss them by just a few hundred metres. I’ve had occasions when I’ve had fly in a particular area but nothing rising, so I’ve rushed a few hundred metres upstream to an area of flats that can occasionally be productive during a hatch…only to find that there are no rising fish and not a fly in sight! So when I did see my first decent hatch on the 31st of the month, I didn’t move too far, despite a lack of rising fish. We had cloud and sunny intervals that day – perfect for both species and we got them. They were later than expected; the Large Dark Olives were the first to arrive at 13.20 and the March Browns followed at 13.45. It was a short-lived affair and it was all over by 14.15, but a good number of fish took advantage and I had my first productive spider session of the new season. Initially they came to the ‘Lazy Baetis’ on the point with an occasional one to the ‘Waterhen Bloa’ and then, as the March Brown hatch kicked in, a few came to a March Brown spider. 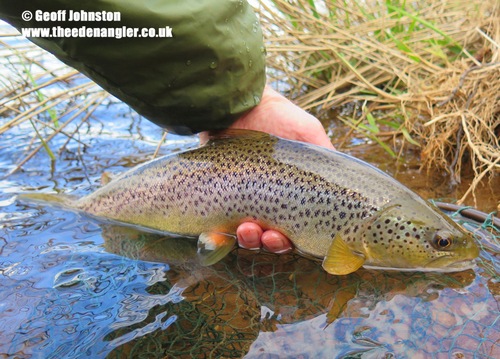 The first spider- caught fish of the new season

I was hoping for similar on the following day for Alan’s visit. Unfortunately, the weather gods produced a day of cloud, blustery winds and showers; hardly ideal for our March Browns, who decided not to show – but a steady trickle of Large Dark Olives made up for it. I often prefer the trickle hatch to a more concentrated one; when this happens the hatch can sometimes last a few hours. On this particular day the Olives started to show at approximately 12.30 and were still trickling off nearly four hours later. 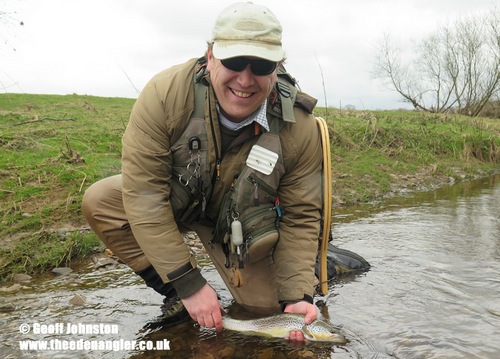 The ‘Lazy Baetis’ and a ‘Waterhen Bloa’ produced a bit of action for Alan before a few rising fish gave him the opportunity to fish – and catch – with dries.