It’s only two weeks until the 2016 trout season kicks-off in Eden and I can’t wait!
As mentioned in previous updates: we’ve had the worst winter floods for years and there has been many changes on our rivers. If I’m honest, most of the changes – if you ignore bank damage etc. – that I’ve seen so far have been pretty positive. The floods have created some nice, fishy looking runs in some of the areas that I’ve recce’d and I’m looking forward to the new season with great anticipation and not the post flood trepidation that many seem to be expressing. Our fish are hardy creatures and I’m sure that they’ll be okay – the grayling have still been turning up in good numbers and I’ve also had a decent amount of well-conditioned trout taking an interest in my grayling offerings of late.

It would be great to be out on opening day and casting a dry fly to myriads of rising fish, feasting on the duns of our ‘Spring Olive’ – the Large Dark Olive (Baetis rhodani). In reality: a typical early season scenario is that there’ll probably be a hatch of olives anytime from midday onwards – depending on the weather – and the surface fly will, probably, be completely ignored by the fish. I used to find it frustrating to see a hatch of flies and nothing rising. I used to call it a ‘wasted hatch’ – but it isn’t. Fish will be feeding, they’ll just be concentrating on the easier sub-surface pickings provided by the active nymphs and emergers.
A favourite early-season method for me on my home rivers – the Eden and Eamont – is to fish a team of North Country spiders. Casting a team of flies across stream and swinging them correctly can be a very efficient way to search the large, often featureless flats of a big river like the Eden. Our early-season trout tend to frequent these ‘spring lies’; areas where the flow is less forceful and a bit more comfortable for trout that may still be recovering from the rigours of spawning and an enforced period of fasting, brought on by the cold and relatively barren waters of winter.

When I say a team of North Country spiders, that’s not strictly true – it’s rare that I fish a team of three spiders when casting across and downstream. My usual set-up consists of two spiders and a nymph on the point. The nymph – normally slightly weighted – fishes slightly deeper, giving the fish another option and, it ‘anchors’ my cast, helping the team to dig-in and cover the allotted ‘zone’ more efficiently. My spring rig always consists of my favourite spider ‘The Waterhen Bloa’ on the top dropper, sometimes one on the middle too, but normally something like a Partridge and Orange or a Hares lug and Plover and ‘The Lazy Baetis’ on the point. 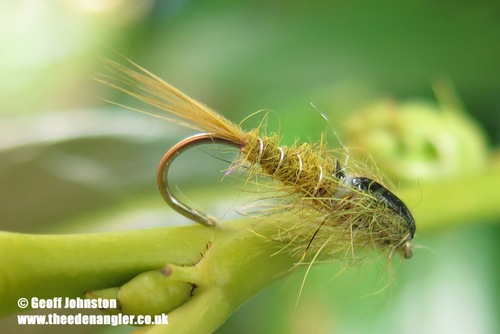 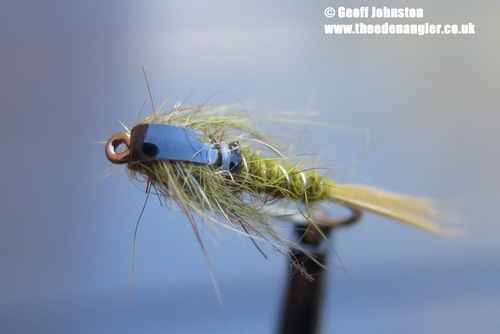 As fly-tiers we’re always trying to come up with new patterns. Over the years I’ve come up with many, but there’s not much new in fly tying and most modern designs tend to be variations on a theme. Often, a search online or through various publications has revealed that my latest innovation is not that exclusive and there’s already something very similar out in the angling world.
‘The Lazy Baetis’ stemmed from Oliver Edwards Baetis Nymph. I got to know Oliver when he and I demonstrated at the John Norris open events for a few years, so I saw his Baetis nymph tied by the master and heard first-hand accounts of it’s effectiveness. After that I tied and used his excellent pattern with some success for a couple of years. Then, whilst ordering some Zelon from Blue Ribbon Flies, I came across Turkey biots in various colours. You couldn’t get dyed Turkey biots over here at the time and as they were only $1.99 I couldn’t resist adding a few shades to my order. Olive Turkey biot replaced the Flexibody that Oliver used on his nymph, picked out olive squirrel dubbing replaced the legs, black flexibody was used as a thorax cover and my ‘Biot Baetis’ was born.
I used biots on nymphs and dries for a while, but the urge to fiddle meant that change was inevitable. I eventually went off my biot patterns; there was nothing wrong with them, they caught fish. But, apart from looking at fish catching capabilites when I tie my flies, I also like them to be durable. I decided a dubbed body would give me the required durability, so the biot body was replaced with Olive Awesome Possum dubbing and ribbed with wire. If honest, I also preferred the look and bugginess of a dubbed body.

So, that’s my ‘Lazy Baetis’. It started life as an Oliver Edwards Baetis nymph and has evolved into what it is now: my ‘go to’ early season point fly. I used to describe it as my lazy version of Oliver’s nymph, hence the name.
I’m pretty sure it won’t be fiddled with anymore – apart from the addition of a bead and maybe a curved hook and…. 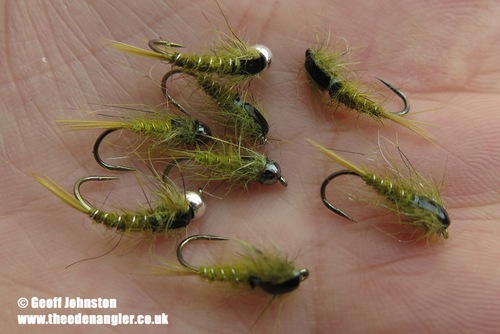 The Lazy Baetis and a few variations